The municipalities do not reveal how they spend public money

Most transparent municipalities are: Shtip, Bitola, Kavadarci, Veles and Ohrid

Most of the municipalities in Macedonia are not so interested to inform their citizens how they spend public money. The research of the Center for Change Management, within the framework of the project “Monitoring the principles of public administration in preserving the values ​​of good governance”, showed that the transparency index in all municipalities is only 20%. In 2016, the transparency index was 16%, which means that new local authorities do not practice transparency at the required level.

Ivana Kjurchieva, from the Center for Change Management says: “The result of that so-called web transparency barometer showed that municipalities on average publish 16% of the data they have which should be public and are in accordance with the citizens’ needs. She adds that we can hardly be pleased that the data are published on municipal websites.

For the ones familiar with the situation in the local government such conditions are bad practice. 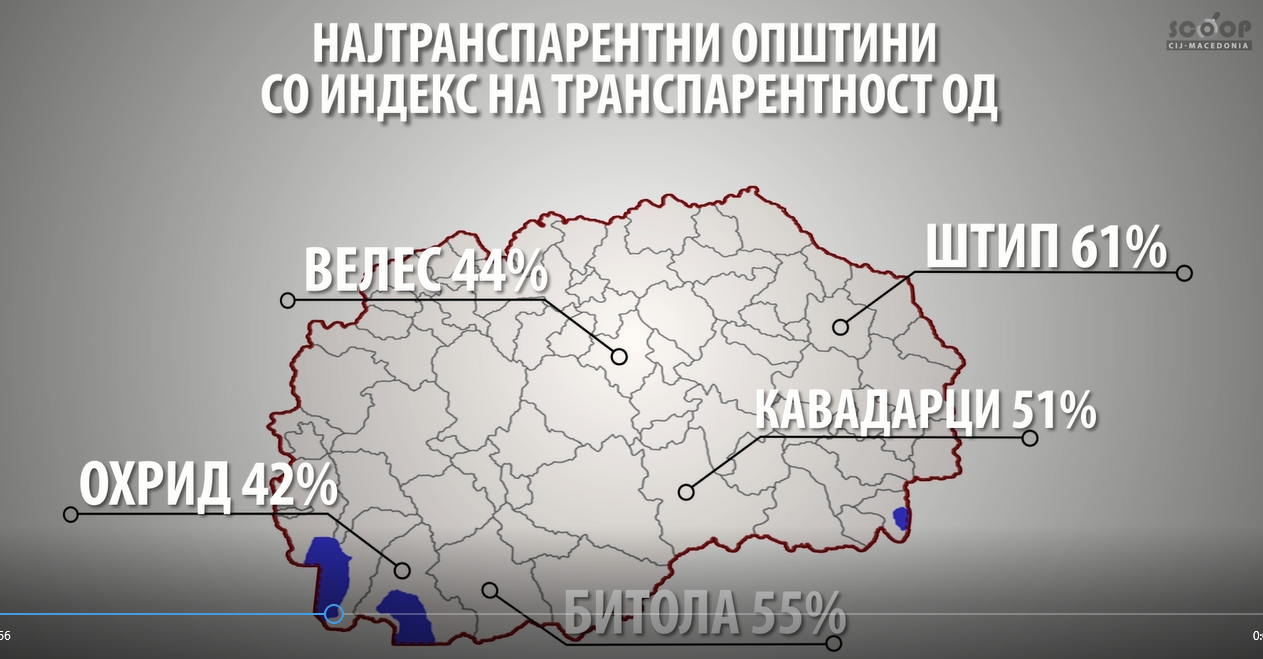 Borche Davitkovski, Professor at the Faculty of Law emphasizes: “At municipal level, nobody gives a report, nor does something, they are bosses, pashas in their areas”.

According to the data from the research conducted by the Center for Change Management, most transparent municipalities by the index of transparency are Shtip, Bitola, Kavadarci, Veles and Ohrid.

Ace Kocevski, Mayor of Veles is proud to say that their website is very transparent. “In terms of transparency in its work the Municipality of Veles has been ranked at the top for years”, he says.

The ways in which municipalities offer their services to the citizens is an important tool for increasing transparency and accountability.

“Municipalities should have enough channels for communication with the parties or to inform them enough how they need to complete a particular service. Within our project, we visited all the municipalities to inform us how the field services are provided. The data showed that only 17% of the municipalities publish in a prominent place how receive the services. Only 28% have posted how to pay administrative fees, and 25% have printed forms or the forms are available on site”, Martin Todevski, Center for Change Management told us.

The central Government is not at all satisfied with the municipal transparency.

According to Damjan Manchevski, minister of Information Society and Administration, the municipalities should be more open to the public, to publish data much more and to be easily accessible, on their websites or in the premises.

Partner organizations of the Center for Change Management that conducted the field research faced difficulties in the research on municipal transparency. They complain that there are municipalities like Kratovo where they could not get the data they needed for the research, even though their intention was clear and honest.

Talat Agush, member of “JEF Macedonia” is convinced that by just looking for transparency, the municipalities work is being improved as well as the services for the citizens.

The current government is trying to make some seemingly pioneering steps to increase transparency by publishing some of the invoices they pay in the state administration. But it completely blocks the system tools that need to bring greater transparency in the municipalities and at the central level. For the first time in the Macedonian history the Commission for Free Access to Public Information has been blocked by the government of the Prime Minister, Zoran Zaev. Thus, on May 2 this year, former deputy Blerim Iseni was expressly appointed as President of the Commission for Free Access to Public Information. But, Zaev’s government did not appoint members of this Commission, so the complaints filed for requests for free access to public information to the municipalities have been blocked for six months. There is no one to approve the Commission’s decisions.

During this project the Center for Change Management also studied the transparency of many municipalities outside Macedonia, where the awareness of informing citizens is on a much higher level.

“Positive examples in the world that are web transparent directly affect the improvement of the quality of life of citizens”, Ivana Kjurchieva, Center for Change Management says.

Some of the mayors are aware of the importance of transparency. According to them, the citizen is to know where his money is spent which, in form of taxes and obligations, go to the municipal treasury.

Ace Kocevski, Mayor of Veles stated: “Transparency is very important, we are elected by the citizens, we exist because of them, and we should serve the citizens, and citizens should always know where, how and how much their money, which flows into the municipal budget, is spent”. He adds that the documents that pass in the municipality should be adapted to the citizens’ priorities.

Municipal websites are the most rapid-growing approach for placing data in the community. Ivana Kjurchieva, from Center for Change Management believes that over 65% of the citizens are informed through modern media, or to be precise, internet.

“Municipal websites are used to promote the mayor’s profile, they should be used much more for publishing data of public interest and which concern citizens. What is least published in the municipalities in the area of finance is the report on realized public procurement, and in 2018 only 4% of the municipalities have done it”, she emphasizes.

“Municipality of Studenichani is really trying and we have such a goal of transparency above all. We try through the social networks Facebook, Instagram, the municipal website, any activity of the mayor, the secretary of the municipality, as seminars, visits, presentations by the employees, the mayor, the councilors, we try to publish it the same day on the website and the official websites on social networks”, Burhaedin Nuhiu, Secretary of the Municipality of Studenichani clarifies.

“This was produced with the financial support of the European Union within the project ‘Monitoring Principles of Public Administration in Preserving Good Governance Value’. Its’ contents are the sole responsibility of and do not necessarily reflect the views of the European Union”

Every eighth woman with breast cancer