Ministers or kings: Education without limit, Interior has no rulebook for representation expenses

Together with her function Minister of Education, Renata Deskovska inherited the possibility of unlimited spending of budget money for representation. Her predecessor, Pishtar Lutfiu “took care” of it, as in his minister’s office a rulebook was passed according to which the minister has the possibility of spending without a limit

The Rulebook that SCOOP received under the Law on Free Access to Information was signed on 17.8.2016. According to the Rulebook, the Minister has an unlimited monthly amount, the Deputy Minister 100,000 MKD and the State Secretary 15,000 MKD per month.

In the previous story on the costs of the state officials’ cards in Macedonia SCOOP found that Pishtar Lutfiu, during his term from 5 April 2016 to 1 June 2017, spent over 20,000 Euros from the budget of this ministry for restaurant services.

Will the newly elected government continue to squander public money? SCOOP tried to answer this question by requesting insight into the representation rulebooks of the ministries. 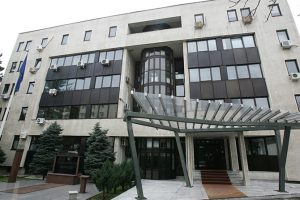 “Ministry of Interior does not register by-laws or internal acts that regulate the subject matters: a rulebook for using official debit card intended for the officials in the ministry and a rulebook on representation”.

This is the answer that the editorial office of SCOOP received, dealing with the topic of how, how much, what the limits are, and who controls spending of the budget money on the basis of the so-called “representation”, after sending a request for free access to public information to the Ministry of Interior. The ministry was asked for representation rulebooks and rulebooks for using official card.

Defense and Culture with restricted amounts

After the media and the general public sharply criticized the enormous costs made by the state officials, part of the ministers of the new government brought new rulebooks on the use of representation. Among them is the Minister of Defense Radmila Sekerinska Jankovska, who passed a new decision on 31.08.2017, by which she annulled the previous one dating May 14, 2012, signed by her predecessor, Zoran Jolevski.

In this ministry, the maximum monthly allowable amount for all representations for the five top positions in the ministry and the General Staff, according to the new rulebook, amounts to less than one thousand Euros.

After the announced internal audit in August 2017, the Ministry of Culture published Instructions for use of catering services and other expenses for official needs of the budget of the Ministry.

Food and beverage orders served in catering facilities in Macedonia and abroad and other expenses related to official needs can be used by the Minister – in the monthly amount of 500 Euros, the Deputy Minister – 400 Euros and the State Secretary – 300 Euros.

The Ministry of Finance has a decision on the right to use catering services in the Ministry of Finance. It states that the minister, the deputy minister, the state secretary, the directors of a body within the ministry, the state advisors, heads of sectors, heads of sectors in a body within the ministry, a meeting room and a cabinet of ministers have the right to free use of catering services from the internal buffet for their own needs, for parties and for official meetings, with a certain total monthly amount and certain spending amounts.

Some ministries do not reveal the limit

Some ministries did not specifically respond what the permissible amounts for representation costs were, but they shared their lists.

For example, the Ministry of Justice shared a long list of catering services, purchase of gifts for special occasions, visits to foreign delegations, holding working meetings, organizing seminars and other events for the needs of the ministry, but not the limit of the holders of the highest functions in the ministry.

The Rulebook on the law, manner and procedure for using the funds for representation in the Ministry of Environment and Physical Planning does not also list the permitted amounts which the Minister, the Deputy Minister, the State Secretary, directors, state advisors and sector managers can enjoy.

From the funds for representation, expenses for symbolic gifts for official guests are allowed, which can not amount to more than 100 Euros per person in MKD counter value.

In the previous story prepared by SCOOP for the official cards of the officials in the ministries, in order for the public to have an insight into spending state money by officials, this ministry did not submit the credit cards statements. Despite the complaint to the Commission for Protection of the Right to Free Access to Public Information, we have not yet received the requested information from this Ministry.

The representation money from the Ministry of Agriculture, Forestry and Water Economy is for realization and maintenance of good business relations, celebration of events, anniversaries, holidays, seminars, educations and other events, as well as for catering services – expenses made for the supply of refreshments, alcoholic beverages and food. Apart from the three main officials, this money is also used by the directors of the departments within the Ministry, without the status of legal entities, state advisers, and heads of departments, presidents of working bodies and commissions of the ministry.

Unlike the Ministry of Agriculture and Finance, the circle of beneficiaries in the Ministry of Local Self-Government is narrower. That is, the money can be used only by the minister, the deputy minister and the state secretary. The purpose list is relatively the same with other ministries, and here, the cost for gifts for official guests is limited to 100 Euros per person.

The Ministry of Transport and Communications has not sent us the amount of representative expenses of the main officials, that is, the minister, the deputy minister and the state secretary. The other officials can spend in the monthly amount of 1,500 MKD, with the exception of the heads of the independent departments, who can spend up to 800 MKD:

The rulebooks are here, it remains to be seen whether the new government, despite the strong promises of “taming” squandering that the previous government was blamed for, will be able to respect the rulebooks for regulating state money spending after having been elected.