Ministerial salaries: half a million Euros only for salaries

One hundred thirty-three thousand denars or more than 2,000 Euros is the salary that former Prime Minister Nikola Gruevski has left the PM’s chair with on Ilindenska bb St. Although this is not the highest amount compared to other offices in the state, and it does not make it exclusive, but it is unique that only in our country it is a real feat to get to such seemingly ordinary information that in neighboring countries can be found out with just two clicks.
Everywhere in the region salaries of ministers and officials are public information that can be found on the websites of local agencies for fight against corruption or commission for prevention of conflict of interest. Here it took us two months to prove the public interest to institutions and through petitions to come to the main information – how much the ministers cost us.
Interior Minister Mitko Chavkov, with a gross salary of 141,958 denars, had the highest salary in the government of former Prime Minister Nikola Gruevski. It is followed by former Prime Minister Gruevski’s with 133,039 denars, who had a slightly lower salary than the one of the head of state, Gjorge Ivanov, who every month takes a gross salary of 139, 060 denars.

Gruevski is followed by the Minister of Finance Zoran Stavreski, then the Deputy Prime Minister Vladimir Peshevski, Zoran Jolevski, Mihail Cvetkov and Deputy Prime Minister in charge of European Integration, Fatmir Besimi. The Minister without Portfolio Goran Mickovski, who unlike the others is almost unknown to the public, has the lowest salary in the government.
Two months waiting for information about salaries
However, to come to these figures citizens have to go through a real ordeal. Center for Investigative Journalism SCOOP-Macedonia waited for two months trying to present to the public the basic information on salaries of officials in the executive power who are paid by the citizens. To our questions, under the Law on Free Access to Public Information, about the salary of the current and former head of state, as well as about each of the ministers in the Government, the Office of General Affairs told us that the disclosure of their salaries “would mean violation of personal data protection”. 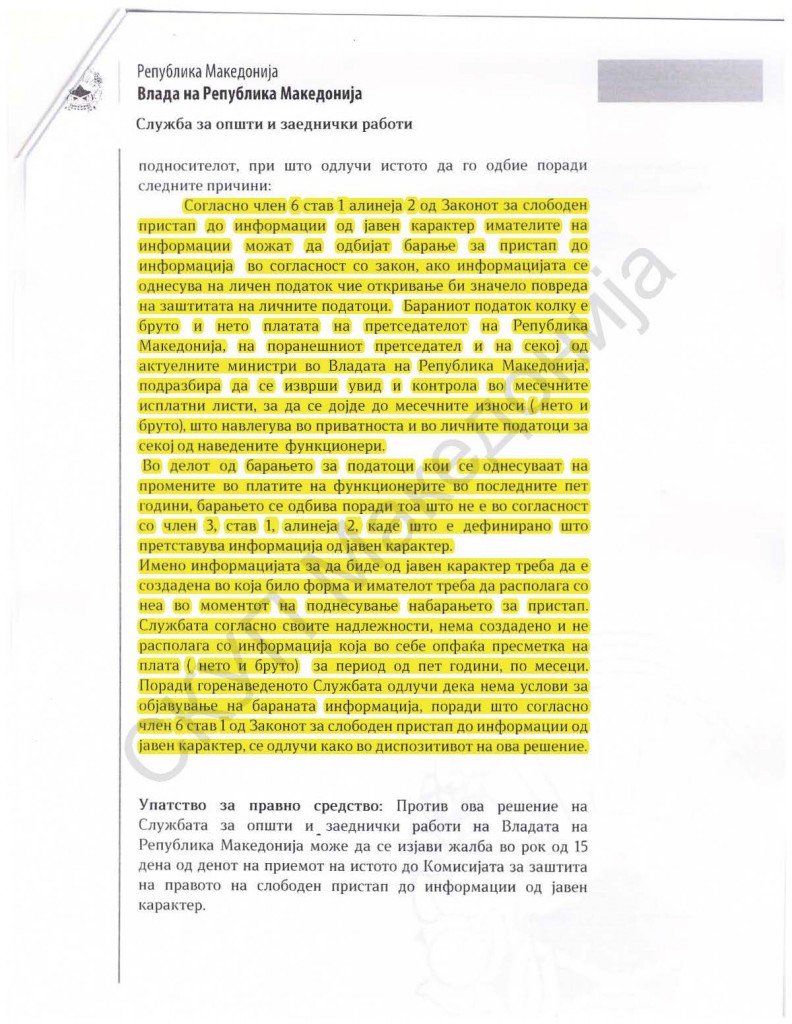 “The requested data about the amount of gross and net salary of the President of the Republic of Macedonia, the former President and each of the ministers in the Government of Republic of Macedonia means to inspect and control monthly pay lists in order to come to the monthly amounts (net and gross), which invades the privacy and personal data of each of the officials”, reads the response from the Office of General Affairs to our application filed under the Law on Free Access to Public Information.
As far as compromising privacy is concerned, in OGA they also mention our request for the cost of mobile phones and travel costs that ministers, together with the current and former head of state, made in the previous five years.
According to the Law on Free Access to Public Information, the government is on the list of holders of information and therefore its work should be available to the public. This is also pointed out by experts.
Experts: Government must not hide salaries 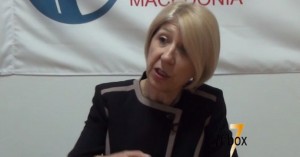 “The salaries of ministers and all holders of public functions is public information, that is public work. It should not be information unavailable or difficult to access for the public. On the contrary, that information should be published by the institutions themselves, either by the Ministry of Information Society which is responsible for that or the government itself. Everything which means a salary paid from the budget is best to be centrally published by one institution. You do not need to seek that information through property declarations or returns on the assets submitted to the State Commission for Prevention of Corruption because it is completely different information which covers other properties, not just the salary”, said President of the NGO Transparency International Macedonia, Sladjana Taseva. According to her, all salaries paid from the budget are to be public, regardless of the profession, as in England and Norway.
There are such examples in the region, too. In Kosovo, for example, on the website of the State Anti-Corruption Commission (http://www.akk-ks.org/en/deklarimet) ministers’ salary can be checked, given in Euros. There is an insight in ministerial salaries on the website of the Serbian Anti-Corruption Agency (http://www.acas.rs/pretraga-registra/), and the website of the Croatian Conflict of Interest Commission (https:// www.sukobinteresa.hr/).
In Bosnia and Herzegovina ministerial and officials’ salaries in general are not available online, but received from the Ministry of Finance at the request of journalists and delivered the same day.